The performance In Another Country is based on a speech that I heard from a homeless businessman, who was talking to himself while on a bench at the Frankfurt Station.

Starting from my memory of his speech, I wrote the script for this performance. A man talking alone in the exhibition space confronts the unaware public with intimate details about his life. The man is dressed in business attire and holds a daily newspaper open at the economy page.

He reveals to have lost his job, his wife, and his house. Then he defines his identity as that of an immigrant striving to integrate into a new country while trying to make a living as a cleaning man. He recalls episodes of voyeurism and sexual obsessions, questioning his sexual orientation. Finally, he reveals to be a certified psychologist from California, now analysis his psychosis in another country. 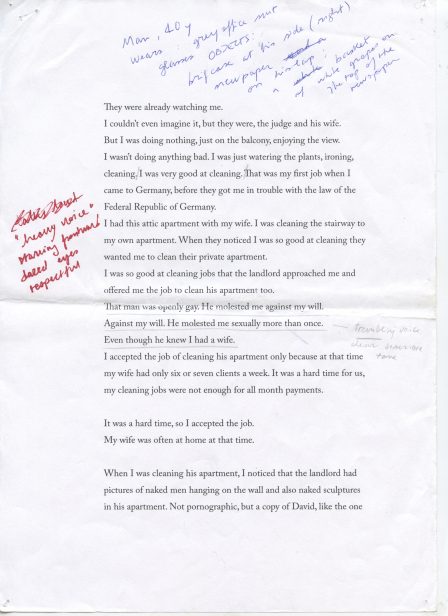 Untitled defines the surrounding space where the performance In Another Country takes place. The sculpture is a copy of the original bench’s support structure, where the homeless businessman was sitting while talking to himself at the Frankfurt central station.

The original bench was comprised of eight individual seats that were fixed to the support structure with screws through sixteen enlarged screw holes.

I have made the sixteen holes through and along the support structure ready to receive the bench seats which are not available. In this work, I wanted to preserve the essential support structure, and to do both an act of construction and an act of subtraction. 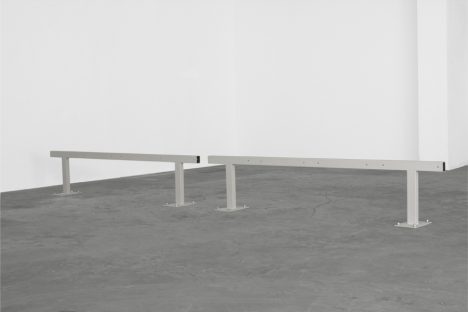 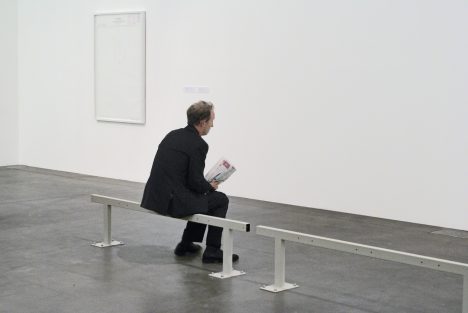 Documentation of the performance at Fondazione Sandretto Re Rebaudengo, Turin 2016